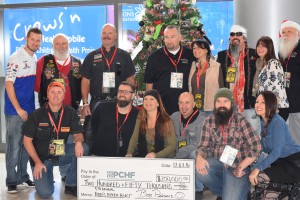 In the past five years the event has brought in more than $1.7 Million of Funding

On November 5 more than 8,000 bikers, bike enthusiasts and music lovers converged on Harley-Davidson of Scottsdale to have a blast for a good cause during the 5th Annual Bob’s Biker Blast. Proceeds from the event totaled $250,000, including a generous donation from The Bob & Renee Parsons Foundation. In the past five years, Bob’s Biker Blast has raised more than $1.7 million for the hospital’s Hope Fund and demonstrates the incredible generosity of the motorcycle community.

“I continue to be inspired by the support of Mr. and Mrs. Parsons and those who attend Bob’s Biker Blast,” said Craig McKnight, Executive Vice President and Chief Financial Officer at Phoenix Children’s Hospital. “The money raised not only helps us fund vital programs and services for our patients, but the outpouring of support from his companies and the biker community show true dedication to sick and injured children around the Valley. We are truly grateful for their support.”

Bob’s Biker Blast celebrates the diversity within motorcycling and the positive impact bikers have on their community. The event formally kicked off with a self-guided ride from Phoenix Children’s Hospital in which roughly 500 bikers participated, revving their motorcycle engines to the delight of the hospital patients before riding to Harley-Davidson of Scottsdale. Later that evening, the crowd enjoyed performances by popular country music artists Montgomery Gentry, Craig Morgan and Kellie Pickler.

“Bob’s Biker Blast is an off-the-charts celebration of music, motorcycles and our community,” said American entrepreneur and philanthropist, Bob Parsons. “It’s also about helping the good folks at Phoenix Children’s Hospital, which Renee and I are proud to support. Thanks to the generosity of the local biker community, and all those who make this an outstanding event, we were able to do a lot of good, for a lot of kids, in a single day.”

Citing the annual event’s dedication to philanthropy and community support, the Governor of the State of Arizona, along with the Mayors of Phoenix and Scottsdale, proclaimed November 5, 2016 to be “Bob’s Biker Blast Day.” The proclamations commemorate the 5th Annual Bob’s Biker Blast put on by Harley-Davidson of Scottsdale, the world’s largest Harley-Davidson dealership, and GOAZ Motorcycles. To learn more, visit: http://www.phoenixchildrens.org/.