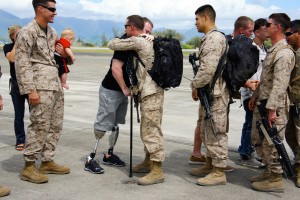 The Semper Fi Fund today announced it has raised a total of $20 million in its annual “Double Down for Veterans” fundraising challenge. The campaign ran for two months, with The Bob & Renee Parsons Foundation pledging to match all donations, dollar for dollar, up to $10 million. Fulfilling more than 20,000 immediate need requests per year, the Semper Fi Fund provides critical resources, often in 24 hours, to post-9/11 wounded, ill and injured members of all branches of the U.S. Armed Forces and their families.

Vigilant champions for veterans’ issues, Bob and Renee Parsons are long-standing supporters of the Semper Fi Fund and, through The Bob & Renee Parsons Foundation, have generously granted more than $31 million to the organization. This marks the fifth consecutive year that Mr. Parsons – a U.S. Marine Corp Vietnam Veteran and recipient of the Purple Heart, Combat Action Ribbon and the Vietnamese Cross of Gallantry – issued a personal rallying cry to join him and Renee in caring for our nation’s veterans.

“Renee and I want to thank everyone who joined us in donating to the Double Down for Veterans challenge and for answering the call to give back to the men and women who have sacrificed so much to serve our great nation,” said American entrepreneur and philanthropist Bob Parsons. “Semper Fi Fund is doing incredible work, providing critical support to veterans during what is often the most vulnerable and difficult time in their lives.”

Since its inception in 2004, the Semper Fi Fund has awarded more than $142 million in assistance to 18,000 service members. The organization has been able to maintain an extremely low overhead average of only six percent, and donations are made directly to service members within 24 to 72 hours. As a result, charity watchdogs have given the Semper Fi Fund their highest ratings for six consecutive years.

“Our vision is simple, to provide our country’s heroes with the best care and support available in their hour of need,” said Semper Fi Fund President, Executive Director and Founder Karen Guenther. “We are humbled by the outpouring of support for this campaign, and are incredibly thankful to Bob and Renee for their remarkable generosity. These funds will go a very long way in making a true difference in the lives of veterans and their families.”

Once again this year, cloud platform giant GoDaddy jump started the campaign with a $50,000 donation, along with a pledge to hire a minimum of 500 veterans, or spouses, over the next five years. Mr. Parsons, who has long been recognized for his philanthropic and entrepreneurial leadership, founded GoDaddy in 1997, and instilled the importance of charitable giving as a priority at the company.

In addition to financial support, Semper Fi Fund offers a variety of programs to aid veterans during recovery and throughout the transition back to day-to-day life. This includes ongoing support through specialized and adaptive equipment grants, education and career assistance, service dog training, caregiver support and treatment for post-traumatic stress disorder and traumatic brain injuries. Learn more about Semper Fi Fund by visiting www.semperfifund.org.