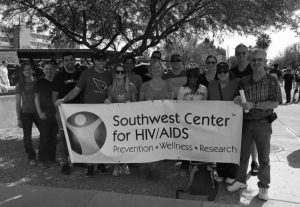 The First Of Its Kind In Arizona

Thanks to a $750,000 donation from The Bob & Renee Parsons Foundation, the Southwest Center for HIV/AIDS will now offer a “Test & Treat” program that will be the first of its kind in Arizona. The gift will enhance the agency’s already strong testing capabilities and provide additional resources for immediate treatment.  The approach is aligned with the World Health Organization’s policy aimed at cutting HIV transmission by suppressing the virus in those carrying it, and in turn, decreasing their likelihood of passing it on to others.  Since 2012, the Foundation has awarded more than $11 million to the Southwest Center through multiple grants, including the creation of The Parsons Center for Health and Wellness.

“Placing those who test positive for HIV on treatment early in their diagnosis, providing immediate access to both medications and behavioral healthcare, will help ensure that the virus is suppressed, undetectable and less likely to spread. This is an essential part of the fight against this disease. We sincerely appreciate the continued generosity and commitment from The Bob & Renee Parsons Foundation to help end the HIV epidemic in Arizona,” says Kristin Kalla, executive director for the Southwest Center for HIV/AIDS.

The program builds on the Southwest Center’s existing services since the agency provides more HIV tests, and identifies more HIV positive individuals, than any other community-based organization in Arizona. The HIV Test & Treat program will increase the Center’s capacity to scale-up in-house medical care, including same-day medication prescriptions to those individuals who test positive. These services will be integrated into existing linkages to care, medical case management, behavioral health, pre-exposure and post-exposure prophylaxis, AHCCCS insurance navigation, nutrition services and targeted community outreach initiatives.

“People are typically met with compassion when serious illness strikes.  That’s not always the case for those impacted by HIV/AIDS,” said Bob Parsons.  “Southwest Center provides compassionate, culturally-competent and immediate care at a time when those diagnosed with HIV/AIDS are most vulnerable, both physically and emotionally.”

The Southwest Center has signed and is committed to the United Nations’ UNAIDS 90-90-90 initiative with the goal of achieving the following targets by 2020: 90% of people living with HIV diagnosed; 90% of diagnosed people on antiretroviral treatment; and 90% of people in treatment have full viral suppression.

“The Southwest Center continues to build on the breadth of services they offer to clients here in Arizona,” said Renee Parsons.  “Bob and I are dedicated to increasing access to medical care to those who are underserved, including those living with HIV/AIDS.”

Having HIV testing and care under one roof helps reduce the barriers to immediate care that those who are newly diagnosed with HIV often experience.  It will be a critical contribution to the success of the City of Phoenix’s 90-90-90 Fast Track Cities Initiative aimed at ending AIDS as a public health threat in our community by 2020.  Phoenix is the 10th city in the United States to sign on to the 90-90-90 initiative, and agency Executive Director Kristin Kalla is on the mayor’s ad hoc committee helping create action plans to achieve each of the initiative’s components.

“HIV/AIDS is a public health crisis that our community can and will eradicate,” said Phoenix Mayor Greg Stanton. “The City of Phoenix is committed to the health of our residents, so that every person can live a full life, uninhibited by illness. The community is grateful for this generous donation from Bob and Renee Parsons to work toward the mission of eradicating HIV/AIDS.”